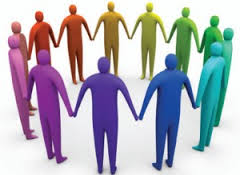 Donald Trump speaks highly of being a team player. He's right, even if he doesn't heed his own advice.

More than ever, working together is integral to survival as well as to success. Keeping the team spirit alive and well in your personal and professional lives will give you some very good, even surprising results.

Working together is clearly important - nobody sensible argues against that. The benefits of teamwork fill book after book on business as well as personal life. But it seems to me that Mr. Trump, once again, demonstrates behavior that Shakespeare would have described as protesting too much*. It seems so obvious to call out teamwork in a book of business advice, but he regularly demonstrates that "me first" is his general rule. Loyalty, for him flows one way (to him) and any teamwork is predicated on his being served first and deferrals granted. Mr. Trump does not practice teamwork unless the team toes his lines.

Which illustrates the point I'd like to make: teamwork only works if you're a part of the team. Be first among equals if you merit such a position, but never be above the team. Lead by consensus, not edict. Otherwise, step away from this deception and lead deliberately, abandoning the urge to falsely claim that teamwork is your goal. Both are valid paths, but be honest about which you choose.

* In Hamlet, Queen Gertrude says, "The lady doth protest too much, methinks", indicating overstated insincerity. In this case, however, I have little doubt that Mr. Trump believes what he says, even if he doesn't live up to it.